Why are there Few Entrepreneurs?

Two recent Wall Street Journal pieces highlight our current poor economy. The first recognizes that entrepreneurship is on the decline. 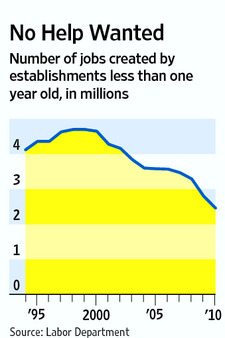 Imagine a small airstrip where single-seat planes head down the runway, get 100 feet into the air and crash back to Earth, joining a heap of wreckage that grows by the day.

You’d think this might discourage people deciding to become a pilot.

That’s a snapshot of what the recent recession did to many small businesses in America, where beneath the wreckage of failed companies lies a collection of would-be entrepreneurs. Economic funk, poor sales, tight credit, competition from new entrepreneurs abroad—all either choked existing businesses or caused aspiring entrepreneurs to hunker down and not take the leap.

Which leads to the question: Will the damage done by the weak economy have a long-lasting effect, discouraging the next generation of entrepreneurs?

Unfortunately, the first piece fails to identify a large reason for the decline in entrepreneurship. For a hint at why few people are willing to take risks, see today’s lead editorial:

The abstraction known as “regulation” is often invoked as a reason businesses aren’t growing or hiring fast enough, and with good reason. Anyone wondering what that means in practice should consult the epic saga of the Ruby pipeline.

Read the whole thing for a clue of the nonsense that firms like El Paso must put up with.

When one multiplies the nonsense that one firm–El Paso–had to deal with across the entre economy–tens of thousands of businesses–one gets a better sense of why there are few people willing to start a business and hire anyone.

The Ruby saga isn’t remarkable except in how unremarkable it is, how routine, and this ordeal replicated countless times across the entire economy helps to explain why the recovery is so mediocre.